Shut up and listen to that radio ad.

Shut up and watch that TV commercial.

Shut up and read that magazine ad or direct mail promotion.

This is the nature of traditional advertising. It’s one-way. You’re broadcasting a sales message to an audience that can’t talk back, or write back.

No wonder advertising is such a hit or miss affair.

No wonder response rates are so low.

Think about it… Nobody likes being told to shut up and listen.

The arrival of the web opened up two-way conversations…

People didn’t have to “shut up and listen” anymore. The web gave them a voice, a platform, places where they could be heard.

This came as something of a shock to a lot of companies that didn’t feel comfortable with the idea their audience could now talk back.

Other companies embraced this new reality, inviting customer feedback and encouraging the use of user-generated content on their sites.

But still… companies and publishers were still in control.

They could edit, filter, or turn off much of that feedback, most of the time.

They still wrote “at” their audience.

The web was ready for step two…

Social media gave us the means to enter into true conversations, and yet…

The growth of social media gave companies a huge opportunity to truly enter into conversations with their prospects and customers.

A platform like Facebook has the functionality to help companies connect with an audience in several ways… from conducting Facebook Live video events to publishing polls and short surveys… and more.

The potential for interaction and conversations is right there.

Most companies use social media as just one more broadcast advertising channel.

Visit a company’s Facebook page and you’ll likely see a ton of promotional posts, and very little interaction from the company in the comment streams.

Barely social at all.

And a huge missed opportunity.

Will chatbots make a difference?

I’ve been writing websites for over 20 years.

I’ve been writing for social media for over 10.

And texting, by definition, is conversational.

Just look at the last texts you shared with a friend, colleague, or family member.

Back and forth. Your turn followed by their turn… and so on.

That’s how it works for chatbot scripts as well. You write different pathways for your script so you can respond appropriately to the input from your users.

In fact, it’s hard to create a chatbot experience that isn’t conversational.

If you try to use a chatbot as a one-way broadcast advertising platform, the experience feels ridiculous.

Maybe chatbots will finally break the broadcast approach to marketing.

I thought social media would break that old-school approach. But it didn’t. Not really.

I have higher hopes for chatbots, because they just don’t work unless they’re created as conversations. Back and forth. Taking turns.

Of course, there’s no guarantee that every chatbot conversation created will turn out to be a good conversation.

But at least we’ll no longer be telling our audience to shut up and listen.

(If you’re interested in chatbots and chatbot marketing, you can read more posts on that topic on the Chatbot Forge blog…)

3 thoughts on “Traditional advertising starts with, “Just shut up and listen”.”

This site uses Akismet to reduce spam. Learn how your comment data is processed.

Get this 35-page eBook free when you sign up for my newsletter. 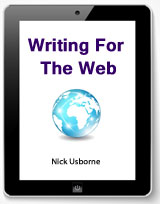 Writing For the Web

7 Challenges every Writer and Copywriter faces when writing for the Web.